Simon Hill’s monologue; Fox’s apologies; APL’s talk on “getting tough” with Fox – Everyone’s groaning but who’s saying anything of substance?

It is comforting to know where we stand in personal and professional contexts. We don’t mind being acknowledged for a ‘job well done’ by our bosses, and it never fails to give us a healthy dose of serotonin, to hear the words: “I love you” from a significant other. Over the past two years, Fox Sports has made it pretty clear what it thinks of The Beautiful Game.

Fox Sports’ coverage of the A-League and W-League has been the subject of much laughter, memeing, and despair. I’m sure some people would state that use of the word “coverage”, for what Fox Sports has offered recently, is quite generous. It’s also becoming clearer that many fans are baying for a move away from the  broadcaster.

The public indictment of Fox Sports’ treatment of The Beautiful Game in Australia has reached boiling point this season but has been negatively simmering for the last two seasons. If we take a look at this season alone, we have seen the debacle that was coverage of the A-League’s Wellington v Sydney match on Saturday, 2 January 2021 – when coverage cut out just before the Nix scored their goal.

This was followed up by a graphic overlay, for a substantial period of the first-half, during the W-League’s Canberra v Melbourne City fixture on Sunday, 3 January 2021.

The W-League then continued to suffer with the Perth v Adelaide game on 14 January 2021 unwatchable thanks to the camera angle and direct sunlight on the pitch.

Followed by the video-feed disappearing and then audio cutting out while video coverage continued, during the Brisbane Roar v Melbourne Victory fixture on Friday, 22 January 2021.

In his article on 25 January, Vince Rugari quoted a Foxtel spokesperson – addressing the recent coverage issues – who said: “Fox Sports take great pride in our production, however, we have unfortunately had two incidents recent (sic) affecting our W-League coverage. One involved equipment which was damaged in transit to the game, the other a software glitch. We are confident these are one-off incidents, and we apologise to W-League fans for the impact on their viewing.”

This is simply a corporate response and one that does not fill people with hope that things would change. In addition, given the myriad of issues that are still to come from Fox after this statement it might be easier to turn this article into a live blog post so we can keep up to date with all the “one-off incidents”.

On the 25 January 2021 episode of the ‘Shim, Spider and so much Moore’ podcast, one of Australia’s noteworthy Football commentators, Simon Hill, revealed that he was gradually silenced before being removed from Fox Sports and not for financial reasons, as initially reported.

Hill finished his opening monologue with the following: “Football should be grateful to Fox, it did a fantastic job for many years, but nothing is forever and frankly the game deserves a brighter future than the one on offer at its current home, where under the present regime it will only ever be seen as a second-tier sport. Football in my opinion must show its maturity by refusing to accept that.”

Not to be hyperbolic, but if the drums of war weren’t already being heard across the Australian Football landscape, Hill just trumpeted the dawning of the apocalypse.

When contacted for further comment, Hill’s media team advised he had expressed his full view in the monologue and had nothing further to say on the matter. One would imagine, this response was based on legal advice.

Fox’s response was to keep business-as-usual, which culminated in the creation of cult hero ‘Tuba Guy’ during the Adelaide v Melbourne Victory W-League fixture, on Friday, 29 January. Coverage of the match was interrupted in the first-half and was replaced with live images of a man working in what appeared to be his bedroom. Fox cut to a commercial break, and then highlights of men’s AFC Champions League matches, before the game was returned to screens. 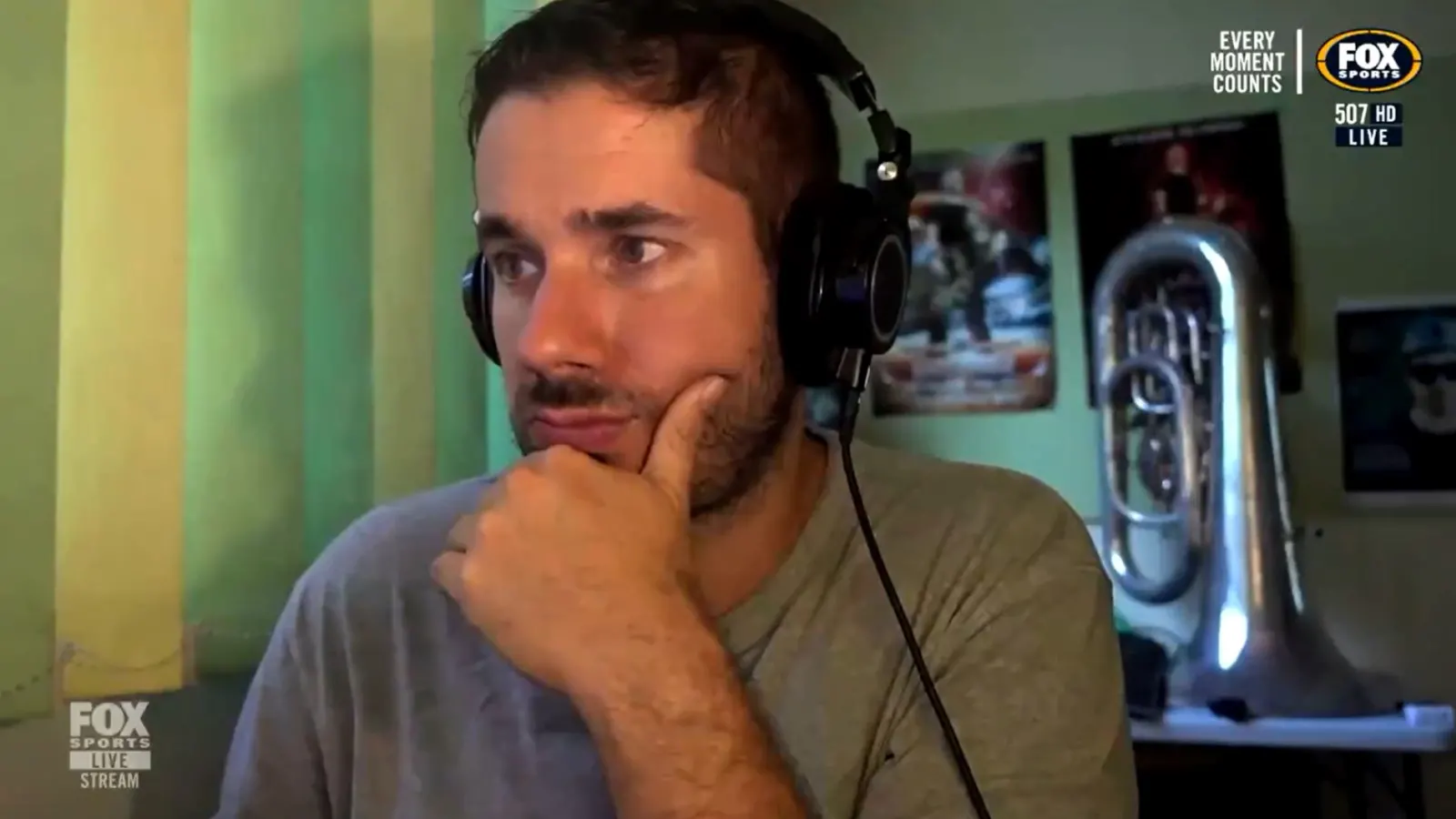 Australian Professional Leagues (APL) Commissioner, Greg O’Rourke, weighed in on the issue in a statement on Saturday, 30 January: “APL appreciate the commitment made by Fox Sports to the Westfield W-League by extending the number of games broadcast beyond the contracted agreement…Unfortunately, this extension of coverage seems to have resulted in various technical challenges. The Westfield W-League is the premium women’s sports league in the country and an incident during coverage last night did not meet that standard…We are working with our partner to understand exactly what happened last night and to ensure that coverage consistently meets the expectations of fans, the League and Fox Sports.”

Yet another corporate response, this time from the body meant to be representing, promoting, and defending the game.

Whilst “one-off instances” like this can be seen as a funny moment, a more critical take is that continued errors, to an already struggling league, does significantly more harm than good. In addition to the continued coverage errors, Fox has also done away with pre and post-game analysis shows for the W-League and we are lucky to even get replays of goals and critical moments during matches.

In both the Brisbane v Melbourne Victory fixture, back in late January, and again this February when Perth Glory took on Sydney FC, there were only single camera angles with no replays of goals. Given there were 14 goals across both games, that is an awful lot of goals not being replayed.

Let’s compare Fox’s treatment of the W-League to that of the AFLW. The W-League was established in 2008 and yet is only available to stream via the paid service, Kayo. Whilst games should also be available directly on Fox Sports, on 25 February we saw Fox bump the Perth v Sydney game for: Fox (502) Charity Shield: 2015 – Rabbitohs v Dragons; Fox (503) Sheffield Shield: VIC v NSW; Fox (505) Joseph Parker Special,  Fox (506) Supercars 20/20 Countdown, and on Fox (507) Lawn Bowls.

In comparison, the AFLW, only established in 2017, has all competition matches broadcast live on the Seven Network, Fox Footy, and Kayo. It has a predominantly female commentary team, pre and post-game analysis segments, multiple camera angles, and you can bet every goal is replayed to the nth degree.

There are multiple stakeholders to point the finger of blame at, but when a live game of Women’s Football is bumped from the primary broadcaster in favour of a charity shield match replay from 2015, no one should be proud of their coverage or think they are “…meeting the expectations of fans, the League, or Fox Sports”.

As a major partner, and broadcaster of the A and W-Leagues (with some shared rights with the ABC), Fox has demonstrated it is incapable, incompetent, or ignorant of the damage it is causing to Australian Football. If the mishaps are down to incapability and incompetence why is football being forced to have a combative and damaging relationship with the broadcaster? Cynically, one might also think Fox isn’t ignorant to the damage being done. Only last year, Foxtel was granted $10 million by the federal government to support the coverage of “women’s, niche and other under-represented sports”, having been previously handed a further $30 million for women’s sport by the Turnbull government in 2017. A total of $40 million dollars that has been spent where and how exactly?

Therefore, Hill’s monologue wasn’t just the ramblings of a jaded former employee. The Beautiful Game has been treated poorly by Australian mainstream media, its coverage is woeful (with far too many examples listed here), and even federal senators are calling out Fox Sports for doing a “half-assed job” and questioning where the money has been spent. However, to only use personal experience and then recede into legal silence will not lead to any meaningful change.

Touch wood, the number of mishaps seems to have plateaued but this does not mean that football fans don’t switch on waiting, expecting, another blunder. If things are really settling down, what has been said or is being done to ensure appropriate change.

The APL are doing the bare minimum or apparently hoping that things will change on their own. Will a change of broadcaster resolve our issues? The Sydney Morning Herald have floated the idea of Stan Sports being a potential candidate for football coverage, but this is dependent on the A-League continuing to be played during the Australian summer which flies in the face of the FA plans to move to a winter schedule.

Aside from that? All quiet on the Western Front and a hope, and prayer, that a broadcaster change might do us some good.

So for all the noise and explosive monologues; the apologetic and excuse-laden statements; for all the posturing and indignation, where much was said in dribs and drabs; not much of any substance is being said. No real discussion is taking place. No real change is happening.

It has been said in a previous TRT article: “As a football family…there is no reason why we cannot/should not, evaluate ways that every aspect of ‘The Beautiful Game’ can be improved, and not just at key moments in time, but all the time…” Why should now be any different?

Enough trash talk. Surely, it’s time for more open discussion around the issues that are poisonously festering in The Beautiful Game and less ‘talk’ that says nothing of any substance.

Johnny has been a Football Referee since 2014. Prior to this, Johnny’s involvement was only as a spectator, despite his desire to play. He is currently a Level 3 Referee, and also holds Level 2 qualifications as a Referee Assessor and Referee Instructor. Although, no lifetime achievement is as fulfilling as being a validated Fanboi of The Ladies League.