I just completed my first year of coaching junior football. I co-coached a Grade 12 Girls Only side alongside a friend whose daughter was in the team. A kind of experiment to see if coaching is for me.

There were moments I had my doubts – stuck in peak hour traffic on the way to training, waking up early on a Sunday morning to get to a match, sacrificing a Saturday night out, the girls doing Tik-Tok dances instead of listening.

I do have to admit that those niggly moments were far outweighed by the positives – the perfectly executed drills, the smiles and laughter during training games, the teamwork on display, the ‘click’ moment when the drills translated in a match, and of course the goals.

I believe that football needs more women representation, especially at the grassroots level. If we start there, we can build pathways. Most coaches I see on the sidelines at kids’ sport are senior players or Dad’s/father figures. I wanted to do my bit to change that. To give the girls a female role model who isn’t a parent or teacher. I wanted the girls I coached to know that in a traditionally male dominated environment it is possible to be successful as a female athlete and/or coach.

During an early training I got asked by one of the players if I had been a professional footballer. Once I finished laughing (I might have played 10 minutes in my life) I explained that I had never played football properly but I had spent a lot of my life watching and that’s how I picked up my knowledge and understanding. Educational moment number one = achieved.

I also believe the role of a coach goes beyond teaching technical aspects. We also need to teach about life and take an interest outside football in order to build trust and a collaborative relationship. I want to lay that foundation so that the players I coach know that we can joke around, and they can express frustration or happiness to me. If one of my players had a birthday during the week, or a tournament for another sport, I acknowledged it, asked about it, and just showed an interest in life outside football.

There was one moment when I felt true validation for that thinking. I don’t know how many times we’d had to tell the girls not to run around or warm-up with their hands in their pockets. However, during a warm-up one chilly morning, I had my own hands in my pockets and was taking part in a rondo to warm up. Inevitably I fell over, like proper fell on the ground – face first, and I couldn’t stop myself because my hands were in my pockets. One of the players just looked at me and with the level of sass only an 11-year-old girl can achieve, said “that’s why we don’t warm-up with our hands in our pockets”. I honestly believe that if I didn’t foster a fun and trusting environment, that interaction could never happen.

If I define the goal I set at the start of the season as “appearing knowledgeable and imparting skills that develop a team” then I think I achieved. I must have done a decent enough job as many of the parents and players have asked if I will be coaching the team again next year. Will I? 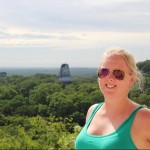 Tracey Hodge is proud to be a representative of New Zealand on The Reserve Team. Tracey is a passionate supporter of the Wellington Phoenix and the NZ National League and is mostly always broke due to following Team Wellington around the world. She is also trying her hand at coaching junior football.